Crumpets are popular in the UK and are eaten at breakfast and afternoon tea.

We have made hundreds of them when living on Koh Samui as they were not readily available and the demand by our British friends was huge! It was easy to make them all happy.

Some call them griddle cakes because originally, they were made in a cast-iron griddle pan. Nowadays we make them in a frying pan which works well too.

The recipe is straightforward and requires only flour, milk, water and yeast as key ingredients. Rushing is never recommended when cooking, and especially so when making crumpets, as the batter mix needs to rest and rise, and the cooking must be done over a medium heat, so best to plan ahead.

The yeast in the batter creates the holes while cooking. Traditionally, they are toasted just before serving and eaten with lots of butter as well as jam and many other toppings.

We made some fancy crumpets and served them with sour cream, smoked salmon and Oscietra Caviar, but you can use your personal preferences to serve them. 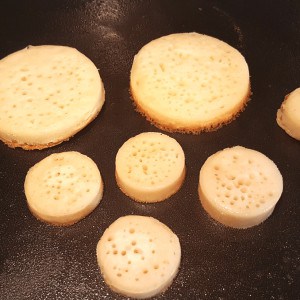