Watercress soup or the French ‘soupe de cresson,’ is an old-fashioned but traditional recipe. The peppery-tasting watercress is a budget friendly ingredient with many health benefits.

Watercress, an aquatic plant with bright green leaves grown in running water. It was previously considered a weed and was first cultivated in the UK in the early 1800’s and is now grown in watery beds throughout the world. The plant is part of the same family of vegetables which include kale, brussels sprouts and cabbage.

The raw leaves have a strong peppery taste, but when cooked, their flavour is mild. Watercress is rich in vitamins C and K, and while it supports your immune system, it might also help with healing from injuries. However, most nutritional benefits are extracted when eaten raw or lightly steamed.

For today’s soup we use bunches of fresh watercress with onions, leeks and chicken stock as main ingredients. The leaves of the watercress should be crisp, dark green and without blemishes. Avoid watercress with flowers as it might taste bitter.

Stems and leaves can be boiled together, but we prefer to cook them separately and blanch the leaves to retain their bright green colour. 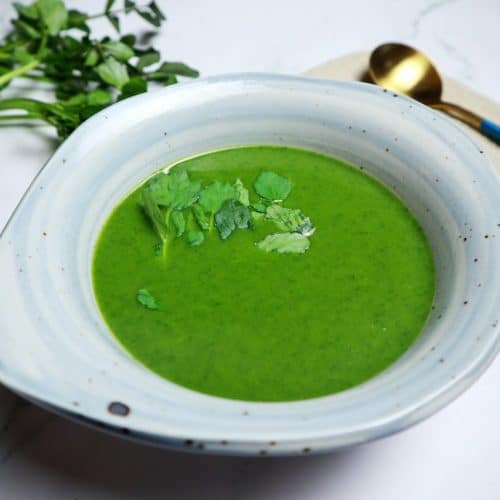 Prepare the soup base