There is often discussion about the difference between stingray and skate.

Skates and rays are a large group of flat bodied fish that are caught worldwide. They are bottom-dwelling fish with pectoral fins that are so large that they appear to be wings.

Skates typically have shorter, thicker tails than stingrays, and they do not have a stinger. Stingrays get their name from their sharp, stinging barb on their tail that helps them defend themselves. Stingrays also tend to be larger than skates, although this is not a hard-and-fast rule.

The flesh of stingrays is flaky and has a succulent flavour. Stingray wing meunière is a classic French culinary term which means that the fish is cooked in brown butter.

The tartare sauce is another classic and adds a refreshing touch. 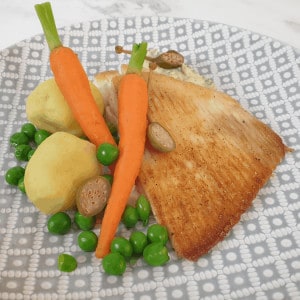 For the tartare sauce