Togarashi, also named Shichimi Togarashi, is a highly popular Japanese spice blend. It is used as an everyday condiment in Japan and can be compared to salt and pepper in the Western cooking world.

Togarashi means ‘peppers’, which is the basic ingredient of the mix, and Shichimi translates to ‘seven’, the exact number of spices included. “Seven-pepper spice” would be a good translation if the Togarashi Shichimi is too difficult to pronounce.

This popular spice mix dates back to the 17th century. Herb dealers produced it first in Edo, what is nowadays known as Tokyo. The basic spices included are hot chili peppers, orange peel, sesame seeds, pepper, ginger, poppy seeds, and nori sheet. It is important to cool the toasted spices before grinding them. Shichimi vendors adjust the mix according to the needs of their customers, much like you would find on markets around the world.

Don’t confuse this dominant pepper spice mix with the Chinese ‘five spices’ which has a more concentrated cinnamon and star anise flavour.

When to use Shichimi Togarashi?

A particularity of Togarashi is that it is often used to add flavour once the dish is ready. 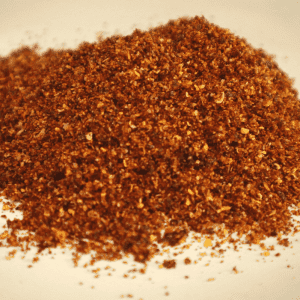