Talk about an easy recipe with a fancy name!

There are a few different ways to make this dish but fish or shellfish, fish stock and tomatoes are essential ingredients. The fish is coated in corn flour before pan frying and flambéing with cognac, then the cooking process finishes in the thick tomato sauce.

Armoricaine sauce is a traditional French recipe originating from coastal Brittany of which the creation dates to 1860 when French chef Pierre Fraisse first made it. This Breton chef who had been working in Chicago and recently returned to Paris opened his own restaurant serving traditional Britannic cuisine.

According to legend, customers arrived late at his restaurant hoping to be served dinner just before closing time!  With little time left, limited produce and only a few lobsters and staples such as aromatic herbs and fresh tomatoes available, the chef had no time to slowly cook the lobster in a bouillon, and instead he would flambé the lobster flesh in cognac and then cook it in a sauce of diced tomatoes, white wine, garlic and fresh herbs.  The dish was a success with late night diners and was called ’sauce Américaine,’ in homage to his experience of working in America where he learnt to prepare delicious dishes much more quickly to accommodate the pace of his American clientele!

Still to this day, a friendly battle of recipe ownership exists between the Americans and the French, who commonly refer to the sauce respectively as either Americaine or Armoricaine. ‘Armorique’ is the ancient name for the northern region of Brittany where the coast is called les Côtes d’Armor. Till today the dish is commonly prepared with shellfish, or the sauce is used to flavour firm white fleshed fish such as monkfish, otherwise known as poor man’s lobster and so Monkfish tails a l’americaine is now a classic. 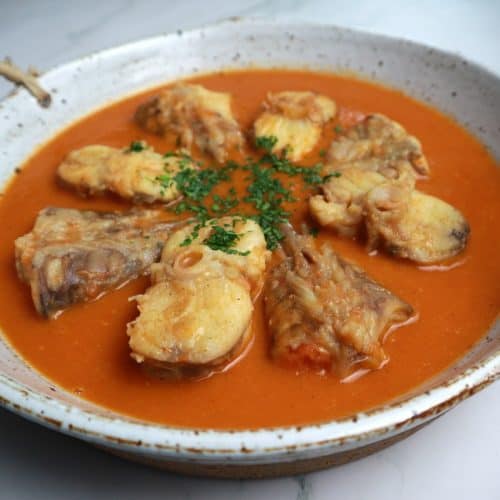