Lotus roots are considered neutral in nature, and raw lotus roots are yin, or cooling, which according to Chinese medicine helps to restore balance into your body.

The benefit of lotus root might be cooling, the taste is very mild with a slightly sweet flavour. The crunchy texture can be compared to celery or raw potatoes and although lotus root softens after cooking or steaming it will always keep its crunchiness.

Today we make a classic Asian preparation and stir-fry the lotus root with soy sauce. Although it is easy to pair it with other crisp vegetables such as asparagus, carrots or snow peas, we like to keep it simple and let the lotus root be the hero of the dish!

As much as this dish is traditionally Chinese, it is also a Japanese delicacy which is called Kinpira Renkon.

Also read our other Chinese recipes. 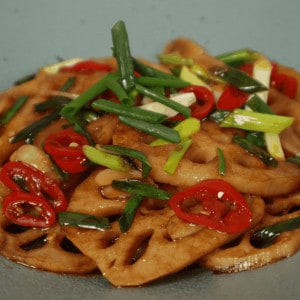