This silky sauce is also called white sauce and it is used on its own or as a base for plenty of other sauces.

Some say it found its origins in Tuscany but we believe the theory that béchamel was invented by Duke Philippe De Mornay, governor of Saumur in France in the 16th century. He named it after his superintendent Louis de Béchamel. This sauce is one of the 5 French mother sauces.

The thickness of the sauce changes according to the recipe’s purpose. The béchamel ratio for butter and flour, also called roux, are as following for half a litre of milk: 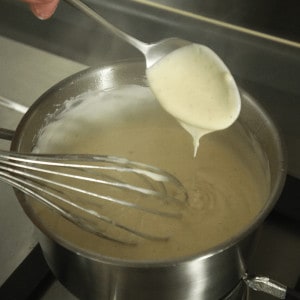 This silky sauce is also called white sauce and it is used on its own or as a base for plenty of other sauces.
No ratings yet
Print Recipe Pin Recipe
Prep Time 15 mins
Cook Time 10 mins
Total Time 25 mins
Course sauces
Cuisine French
Servings 1 litre
Calories 737 kcal